April 15 marked my two-year blogiversary. Two years ago, inspired by the book Julie & Julia, I started cooking new recipes and writing about them here...as a way to keep myself occupied in my cable-less, internet-less (I was pilfering any stray wireless signal I could get), drafty old house and as a form of cheap(er) therapy. My first post was about Julia Child's potato & leek soup.

In December of 2006, my life had been uprooted. I had left my husband after 13 years together, including 7 years of marriage. I gave up the life we had built together; I gave up a new home (my dream house) and most of my friends. I was trying to find that elusive thing called "true happiness."

Since then, I've faithfully stuck to my cooking project...making and posting at least one new-to-me recipe a week (see my favorite recipes and posts of 2007 & 2008). I've also met several other food bloggers, joined the Foodbuzz featured publisher community, began working at Kitchen Conservatory, and gotten into the St. Louis food scene. I'm still living in that old, drafty house...but now I have direct tv and my own wireless internet access.

Have I found true happiness? Honestly, I hate to say it, but I'm not sure. These days, with my new teaching job (high school English), I simply don't have enough time to complete all of the cooking projects I'd like to. I'm almost always mentally and physically exhausted...and overwhelmed with the amount of school work (planning & grading) that I'm always behind on. Plus, my boyfriend has a work schedule that is nearly the complete opposite of mine (he manages a bar in St. Louis), so I find myself alone often.

But, I'm managing...or at least trying to. I'm trying to make time to experiment in the kitchen more often, because cooking really does calm me. It makes me feel creative and successful. I did manage to make a couple new recipes lately, including one for braised baby artichokes...

* * *
After spending four hours prepping in the kitchen at Monarch on April 11, including trimming way too many artichokes, I decided to make sauteed baby artichokes for Easter dinner. A baby artichoke isn't just a smaller artichoke; it's actually a different variety of artichoke that matures at a small size. 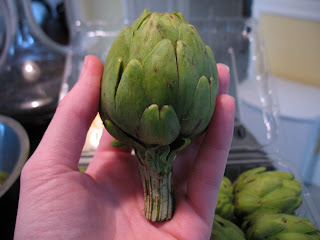 The best thing about baby artichokes, besides being MUCH easier to trim than those big 'uns, is that there is no choke in the middle, so you can eat the entire thing (minus some of the tough outer leaves, of course). 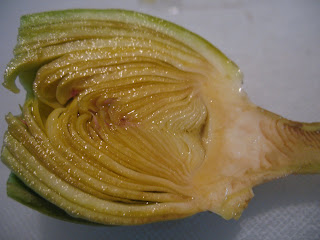 To prep the artichokes, I picked off the darker green petals until I reached the lighter green ones near the center. I then trimmed off the top to remove the sharp needles & peeled the stems down to the center. I cut the artichokes in half lengthwise & let them sit in a bowl of water with a couple lemons squeezed into it to prevent them from discoloring. 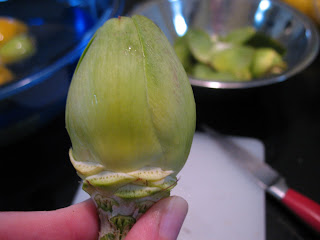 To cook the artichokes, I seared them in a non-stick skillet with a bit of olive oil & garlic. I added white wine, chicken broth, & fresh thyme sprigs to the pan and let the artichokes braise (covered) until they were tender. I served them with shaved aged gouda cheese & a splash of freshly-squeezed lemon juice. 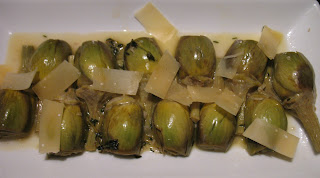 Happy Anniversary! Your blog inspires me to write more and take chances in the kitchen. I'm so happy we became friends. Keep up the great work, Kelly!

Thanks, Rach! You have no idea how much that means to me!

The more I learn about you the more I am amazed! Congrats!

The more I learn about you the more I am truly amazed! Congrats!

Congratulations on the blogoversary! I really need to use fresh artichokes more often. i'm a little scared of them. Baby artichokes may be the way for me to start small. :P

pinkstripes: This is the first time I've used baby artichokes, but I eat the bigger ones all the time.

To make them, simply cut the tips of the leaves off with scissors to remove the sharp needle and cut an inch off the top of the whole thing with a knife. Then, boil or steam the artichoke until the leaves are easily pulled off. Then, eat the leaves...pull them through your teeth to scrape off the tender meat on eat leaf. I like dipping them in lavender butter, too! When you get the the choke in the middle, scrape it out and eat the tender heart! Easy!

Awww, Travis! Thanks so much!