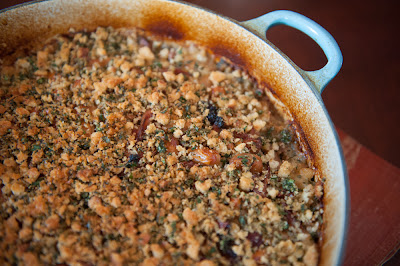 
"When Martha Stewart asked the founder of gourmet meat purveyor D'Artagnan about the hearty French dish of duck confit, garlic sausages and tarbais beans, Ariane Daguin responded in a thick Gascon accent that imparted culinary authority. 'Cassoulet,' she said, "it is not a recipe in France. It is a way to argue between villages.'"

Crapanzano goes on to explain cassoulet's history, a dish that originated with "white beans, garlic, pork shoulder, sausages, [and] stale breadcrumbs." The name cassoulet refers not to the recipe itself but to the dish it's assembled and baked in.

When my friend Steph and I decided to make a traditional cassoulet for Easter, I began my research with the source of all French food: Julia Child's Mastering the Art of French Cooking. Julia's "French Baked Beans" recipe is 6 pages long. In the introduction, she explains:


"As cassoulet is native to a relatively large region of France, each part of which has its own specialties, arguments about what should go into this famous dish seem based on local traditions. Toulousains insist that it must include among its meats preserved goose, confit d'oie, or it is not a real cassoulet. [...] Then there are those who declare the cassoulet was born in Castelnaudary, and originally contained only beans, pork, and sausages. A heretical few suggest the cassoulet was not a French invention at all, but an adaption from the Arab fava bean and mutton stew. And so on, with variations and dogmatisms rampant."

While a traditional cassoulet can be made with a variety of meats--duck, goose, pork, lamb--Julia says that "the important item is flavor, which comes largely from the liquid the beans and meats are cooked in." Her version is made with pork loin, lamb shoulder, unsmoked bacon & homemade sausage cakes.


"The perfect cassoulet is one that sends wave after garlicky wave of warmth from the end of your tongue to the tips of your toes. The beans are held in just the right amount of herby, tomatoey goo, the breadcrumb crust is crisp, and the first mouthful piping hot. It should contain haricot or broad beans, some fatty pork, garlicky sausages and a thick breadcrumb crust."

I pieced together aspects of a few different recipes to create my own Frankenoulet, but I used Crapsanzano's recipe from the Wall Street Journal (which she adapted from Thomas Keller's Bouchon Bistro) as my starting point...forgoing her step to reduce the bean cooking liquid, adding caramelised onions to her garlic confit puree, layering the cassoulet in Bourdain/Ruhlman fashion, and baking the assembled dish uncovered for a couple hours before adding the breadcrumb topping. 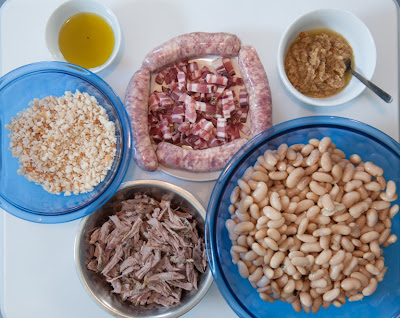 Steph and I made our cassoulet with (clockwise from bottom right) White Emergo beans (most recipes call for Tarbais beans, but Julia says that Great Northern beans work just as well), duck confit (thanks to Steph, who used a whole duck), fresh baguette breadcrumbs, olive oil used to make the confit (instead of using duck fat throughout the recipe), locally-made Bolognese sausage & pancetta, and caramelized onion & garlic confit puree.

Cassoulet isn't necessarily difficult to make; it just takes 3 days to prepare all the separate parts before baking the finished dish. Julia refers to this as "the order of battle." Day One: Make the duck confit (if you're making it instead of buying it) & soak the beans. Day Two: Cook the beans & make the garlic confit, then refrigerate overnight. Day Three: Finish the rest of the ingredients (make breadcrumbs, caramelize onions, cook pancetta & sausage), assemble the cassoulet & bake.

And you CAN do it. WE did. So go do it already! 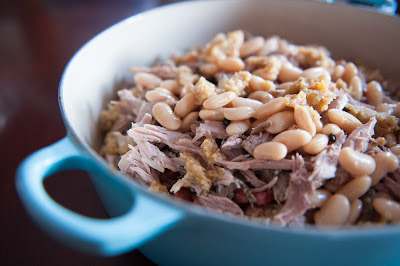 * I used the skin from the pancetta. 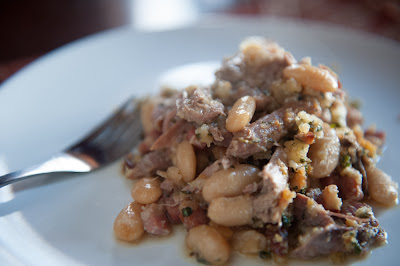 I once made the Bourdain/Ruhlman version of cassoulet, and to be honest, it was a pain in the ass ... and it didn't turn out well either.

Luckily, after some much-needed tweaking, I was able to save it, but your version sounds much better & easier anyway!