I got to sample this cocktail at Kitchen Conservatory last night and thought is was a genius idea...refreshing & fruity yet seasonally festive, something a bit different for the holiday season. This was so good that I'll I'm thinking of making a few for an upcoming backyard bonfire. Kudos to Barb Nack, who served this drink in her Girls' Night Out class. 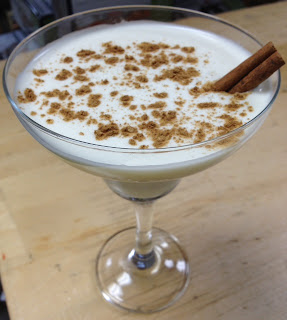 Kelly's note: I reduced the ice by half for each drink. If you like an icier beverage, use a full cup of cubes.

If you stir the drink gently with the cinnamon stick, you'll create a spicy swirl. Yum.

For the pumpkin pie spice:

Stir to blend in a small bowl.
at 1:43 PM
Labels: beverages, holidays