I recently read Susan Loomis's memoir On Rue Tatin, her story of "living and cooking in a French town." It is a quaint tale, one filled with walks to the local pâtisserie & boulangerie, shopping at the farmers market, trips to Paris, and eating meals outside in the courtyard...all while renovating a historic country home. Her chapters are, like most food memoirs, punctuated with recipes inspired by the local fare & contributed by neighbors and friends.

Near the end of my reading, I was motivated to buy a little metal table and chairs for my front porch so that I could take my meals outside. I picked up some small, deep purple plums at my local farmers market (which I'm lucky enough to have just a few blocks from my house) and decided to make the clafoutis recipe Loomis included in her book. She writes:


I was standing in line to buy pears at the market in Louviers from a handsome young pear grower. The elderly woman next to me was being very choosy about the state of her pears and their variety, and I asked her what she was going to do with them. "I'm going to make a clafoutis," she said with a mischievous look. "Oh, no. Everyone who tastes it says it is the best they've ever eaten."

The addition of honey is what Loomis says makes this recipe unique. The technique is also different that the traditional clafoutis I've seen; instead of mixing the batter in a blender, it is folded with whisked egg whites. The result is a kind of double-layered dessert...custard & fruit on the bottom with cake on the top. 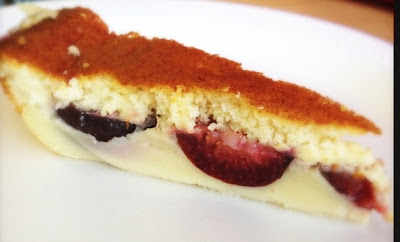 oh my! that looks really great

Love Susan Loomis! I think I've read (and probably own) most of what she's had published (even one or two that were published outside the US). Been a fan of hers for a long time.