For my Shakespeare in the park picnic dessert, I wanted to make something s'mores like. You see, I have this thing for s'mores and anything s'more-ish...cupcakes, bars, scones, cocktails....any thing. So, when I saw "s'mores in a jar" on Pinterest, I knew I'd found my easy-to-pack sweet dish.

That recipe was simply crushed graham crackers, chocolate pudding, and marshmallow fluff layered in jars & topped with toasted mini-marshmallows. Sounded easy enough, but since I didn't want to invest in new jars, I re-imagined this dish as individual tarts...graham cracker crust, fluff, pudding, minis on top (which we toasted at the play with a brulee torch). 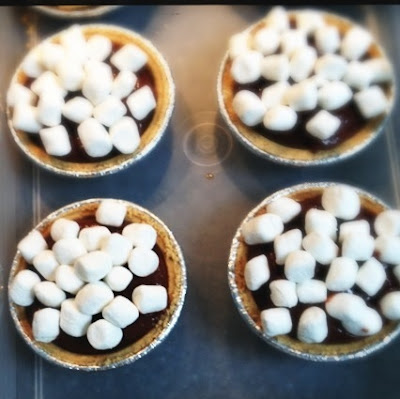 While these tarts were cute & fun, they were not very foodie-friendly, having been constructed with all pre-made/packaged products. Plus, the marshmallow fluff simply melted away into a liquidy mess. Eww.

And, we can do better than that now, can't we? Here's my "gourmet" version:


S'mores Tarts
For the crust:

For the milk chocolate pudding filling (recipe from Epicurious):


For the marshmallow topping (recipe from Bon Appetit):