I recently bought myself the Momofuku Milk Bar cookbook and just had to make something right away. I chose this recipe to serve at my new stove christening dinner party, after making osso buco and polenta with my friend Stephanie.

The milk tastes just like the cereal you steep it with. I chose two of my favorite childhood cereals, Golden Grahams & Cap'n Crunch. In the cookbook, pastry chef Christina Tosi recommends toasted cornflakes or Fruity Pebbles. I think Apple Jacks would be good, too.

The flavored milk can also be used in coffee or to make ice cream (Tosi's recipe calls for gelatin instead of eggs in the ice cream, so as not to mask the flavor of the milk). I chose the panna cotta recipe because it was pretty simple. 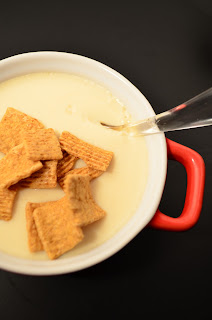 For the cereal milk: