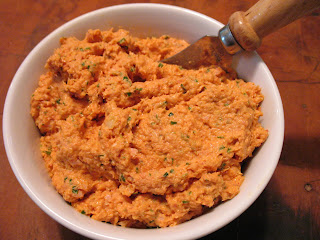 For Easter dinner this year, I bought a 15-pound bone-in ham. Ok, for two people, that is WAY TOO MUCH HAM...even in my pork-centric world. To avoid an overdose of standard ham sandwiches, I picked a few recipes to make with the leftovers that week: ham fried rice, ham & bean soup, ham & chive frittatas, & ham pot pie.

But, for the most part, those are the obvious use-up-leftover-meat dishes. In searching for some more exciting ways to use up the rest of the ham, which I cubed/vacuum-sealed/stashed in the freezer, I came across many great sounding recipes (see list of links at the end of this post).

Most recently, I made Deviled Ham. I was leery at first. My parents used to buy that "sandwich spread" shit from the supermarket deli, and I despised it. It looked and smelled like cat food. Plus, "deviled" ham just doesn't sound appetizing to me.

Yet, this recipe sounded so good...smokey ham, creamy mayo, tangy mustard, sweet maple syrup, spicy hot sauce...what's NOT to like.


And, it was good. Really good. Like, "I want to smear this all over my body" good. (You can be rest assured, however, that I did NOT do that. I swear. Really. I do.) We ate it with lightly toasted baguette slices, a simple green salad, and a chilled dry rosé wine. It will be a staple in my diet this summer.

Got a hankering for more ham? Who doesn't! Try one of these recipes:

Kelly, this is AMAZING. We had ham leftover in the freezer that needed used and absolutely loved it. Thanks for sharing!