For a couple years now, pork has been in its heyday. Pork belly is the in vogue menu item, and bacon nearly has a cult following. However, on its November list of the Top 10 Food Trends for 2010, Epicurious.com predicted that lamb would trump pork as everyone’s favorite meat. 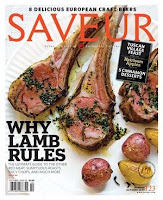 Saveur asserted that while home cooks have shied away from preparing and serving lamb in the past, “that is starting to change […] as tastes become worldlier and good-quality lamb is increasingly available at butcher shops and supermarkets.”

A couple weeks ago we bought some lamb shoulder chops from Garden Spot Market with the plans to braised them in red wine & eat them over noodles. Now, I realize that slow braised meat isn't really something you'd typically eat at the end of May....but, until this week, the weather in St. Louis was downright chilly. In fact, I had to turn my heat back on a few evenings. All of a sudden, though, the summer heat is here.

So, while this recipe made a great weekend dinner when it was unseasonably cool...I'm not sure I'd be making it THIS week in my unair-conditioned house. Nevertheless, it was a very tasty (and easy) dish to make. I'll definitely keep it in my repertoire for those unexpected cooler evenings. 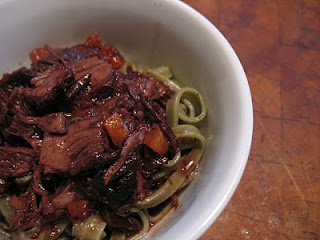