School starts again this week, and I was kind of looking forward to starting a new year. Then, I was dreading it....not because of the early mornings or the new curriculum or some can-be-obnoxious students (and teachers)....but because of the 100+ degree temps around here last week and my school's lack of air-conditioning.  Luckily, the weather is supposed to be a bit more mild for the start of school this year.
When I tell people that my school is not air-conditioned, they find it hard to believe that a school in the United States in 2010 doesn't have that technology. But, for whatever reason (I'm guessing finances), only the offices & the library are cooled.
And, my building is a greenhouse. Not figuratively speaking, but LITERALLY a greenhouse. It is a big square building with an open courtyard in the middle that has a glass roof & trees growing in it. MOTHERFUCKING TREES, PEOPLE. The hallways circle the courtyard, and all the classrooms open to it. My room is upstairs. It's hot up there, I mean downright sweltering. No wonder the students are so crabby at the beginning of the school year.
On the other hand, my house isn't really air-conditioned either. I mean, I have central air upstairs only, but it doesn't do much for this 3000-square feet monstrosity. We rely on window units in the kitchen and bedroom. Still, with three-digit temps, it's pretty stuffy inside most of the time.
To cool off, I made a pot of zucchini vichyssoise last week and stuck it in the fridge for dinner on Wednesday. We normally don't eat cold soup, but I found this recipe to be very refreshing and satisfying. Even Jerad, being the meat-centric eater that he is, liked it. 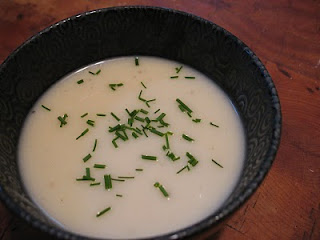 Nice to see you last night, also to meet the meat-loving Jared. See you soon!