One of our favorite meals in Las Vegas, where we were married in March, was at Bobby Flay's Mesa Grill. We stopped in spontaneously for an early lunch on the day of our ceremony. Everything we tried was delicious...the tuna "nachos," spicy beef tenderloin tartare, smoked shrimp tacos, & particularly the pressed Cuban burger.

Jerad didn't say much when he took the first bite of the burger. "How is it?" I asked, worried that he wasn't cooing over his food like I was over the shrimp tacos I'd ordered. He smiled slightly, paused, and admitted, "It's probably the best burger I've ever eaten!" He didn't gush over it because he didn't want to share!

Since we've been home, Jerad has reminisced fondly about those burgers with plans to create them someday. After seeing the recipe in Flay's Burgers, Fries, and Shakes book (in which he calls them Miami Burgers), I decided to make them for Jerad last night.

Jerad & I are also featuring this recipe (along with two other burgers, french fries, onion rings, & an adult milkshake) in a couples cooking class we're doing at Kitchen Conservatory this fall. I'll post more details when the new schedule is published on August 1. 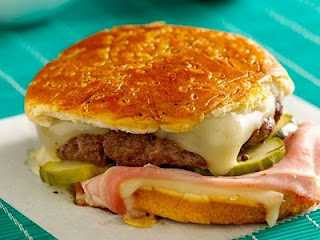 * Also, Jerad swears there were bread & butter pickles on his burger at Mesa Grill. I can't verify this, though, because he didn't share his damn burger with me.

Holy shit that looks good. I bet I wouldn't share either!!

WTF? Looks like the monkey got away from his handler last night.

We tried these burgers and loved them! I used ciabatta bread for the buns. We ate them 2 nights in a row, we liked them so much!! Thanks for the recipe!

Glad you liked them!