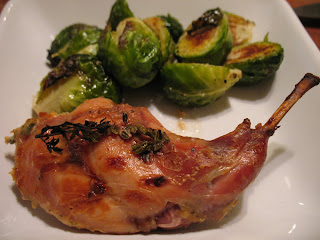 The secret ingredient, which neither team knew of ahead of time, was rabbit. I'd never eaten rabbit before and was surprised by how much I liked it. Our only hesitation in cooking it at home was finding the rabbit to cook.  Luckily, we bribed our friend Justin (who operates Yellow Tree Farm) with a free oven. In return, he gave us one of his rabbits.

Thankfully, Justin had already skinned, cleaned, and cut the rabbit into four pieces. We chose a fairly classic recipe--roasted rabbit with mustard--but were hesitant about it turning out. The marinade was thick and didn't seem like it would cook up well (the recipe says to cook the rabbit with all its marinade). However, the rabbit turned out tender, flavorful, & perfectly delicious.

If you've never eaten rabbit before, don't be scared. It is very similar to chicken, with a slightly sweeter taste (though not gamey). I highly recommend it!