I do not celebrate Valentine's Day.  I don't see the point, really.  Even when you're in a relationship, the pressure to be romantic is often times overwhelming.  Going out to eat on Valentine's Day is usually a bummer, too.

If you're not in a relationship, it's even worse.  When I was in college, my boyfriend lived four hours away.  So, my roommates & I would make Valentine's Day a girls' night out.  Being surrounded by couples oogling each other did not help our dinners go down easily.

So, when I was planning my winter cooking classes for Kitchen Conservatory, I had an idea to do an anti-Valentine's Day Girls' Night Out class.  My menu was inspired by my frustration at my boyfriend, now fiance, for not giving me a birthday gift in October.  (It's all good now; he was saving up for the engagement ring he'd already designed.)  I tried to incorporate flavors that mimic feelings--sour, bitter, salty--and that you normally wouldn't eat on a date--garlicy & spicy.


I think this menu would make a fun dinner party for couples & singles alike:

The martini recipe (from the book Mix, Shake, Stir) called for mixing chocolate vodka with Godiva dark chocolate liqueur and passion fruit puree. I used frozen passion fruit "pulp" that I found at Global Foods.  I couldn't find dark chocolate Godiva, so I used the original version.  Ok, so, the original is creamy...and I'm thinking that the dark is not, because the acid in the passion fruit instantly curdled the drink.  Ugh.  Nothing like screwing up in front of an audience!  Next time, I'll simply use the Godiva with a fruit-flavored vodka OR chocolate vodka with a fruit juice. 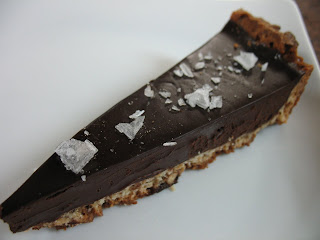 
1.  Make the crust: In a standing electric mixer fitted with the paddle, beat the butter with 3/4 cup of the pretzels and the confectioners’ sugar at low speed until creamy. Beat in the flour and egg. Add the remaining 1/2 cup of pretzels, being sure to leave some pretzel pieces intact. Flatten the dough between 2 sheets of plastic wrap and refrigerate until chilled, at least 30 minutes. NOTE: The dough will have the consistency of cookie dough.

2. Preheat the oven to 350°. Roll out the dough between the sheets of plastic wrap to a 12-inch round. Peel off the top sheet and invert the dough over a 10-inch fluted tart pan with a removable bottom. Press the dough into the corners and patch any tears. Trim the overhanging dough and refrigerate the shell for 30 minutes or until firm.

3. Line the shell with parchment paper and fill with pie weights. Bake for about 30 minutes, until nearly set. Remove the parchment and weights and bake for 10 to 15 minutes longer, until the tart shell is firm; cover the edge with foil if it darkens too much. Let the shell cool completely. Brush the melted chocolate over the bottom and up the side and refrigerate for 10 minutes, until set. NOTE: Don't worry if there are holes in the bottom crust after it's baked; brushing the melted chocolate on it will seal any holes.

4. Meanwhile, make the filling: In a medium saucepan, bring the cream to a simmer. Off the heat, add the chopped chocolate and let stand for 5 minutes. Whisk until smooth. Transfer the filling to a bowl and let cool to room temperature, about 1 hour.

5. Pour the filling into the shell and refrigerate until set, at least 4 hours. Sprinkle lightly with sea salt (and crushed pretzels, if desired). Cut into wedges, and top with crème fraîche or whipped heavy cream (optional) to serve.
at 1:19 PM
Labels: desserts, holidays, menus

I need that tart. in my mouth.

I would pay for a bite of this...WOW!

that slice of tart looks nothing short of sex on a plate...

Oooh this looks great. And your entry makes me want to go try another class at KC.

AHHH! I have been dying to try this recipe since that issue came out!!! You've certainly inspired me to do so now, thanks :O)

You should def. try this tart. It's THAT good.

Great post! It's respectable how you took control of Valentine's Day. I thought I'd share a great dessert for you to try, called Double Chocolate Cookies. A friend of mine from Sunset 44 Bistro told me about them and they are delicious.